More evidence that the values of the modern workforce are changing not just in the U.S. but worldwide comes from a new Thomson Reuters survey of  more than 1,000 professionals in Brazil, China, India, the U.K. and the U.S. The key finding is that a majority of workers today say they are more motivated by what they do than how much they make. The majority of Americans would rather have a job they enjoy (72%) than one that pays well (28%). Further evidence that Gordon Gekko is a historical relic.

Those who still cling to racial stereotypes should read Daily Beast’s take on the survey: “Workers are now united by global connectivity and curiosity rather than race, class, or gender.” The Beast also notes that the gender gap is rapidly closing, particularly in developing markets. “Ultimately, 52% of professionals in emerging markets see an equal number of male and female corporate executives within the next 25 years,” compared to  36% of professionals in developed markets. In other words, emerging countries are leveraging all their workforce resources to beat us.

Naturally, there’s data on collaboration and social media. Some highlights:

Ninety-percent of professionals who telecommute on a daily basis use at least one social media platform. Comment: Facebook is replacing the socializing power of the office water cooler and powering the distributed workforce revolution. I can’t remember the last time I talked to someone who comes in to the office five days a week. Social networks are transforming the way we work (whether the IT organization blocks them or not).

Fifty-nine percent of satisfied professionals say that their organizations allow them to participate in online groups and/or chat rooms as part of their work compared to 40% of dissatisfied professionals. Comment: Note the “satisfied” qualifier. I wish the IT organizations that still block Facebook and YouTube would get the message: Socializing has always been part of the workplace and is essential to worker satisfaction. Let people use these platforms. They will figure out how to apply them to the business. Just like they did with e-mail and the Internet,

Eighty-two percent of emerging market professionals and 41% of developed market professionals agree that blogs, information from social media or crowd-sourced information on the Internet are highly useful in helping to understanding an issue or news item. Comment: In other words, the developed world still has an old-media mindset whereas people in emerging markets have never had old media. It’ll be interesting to see if their more expansive perspective helps them actually understand the world around them better than we do, and perhaps understand that there is a world beyond their own borders.

Eighty-three percent of emerging market professionals and 49% of developed market professionals agree that carefully filtered information from blogs, social media or crowd-sourcing can be as accurate and useful as traditional media information. Comment: Sort of a restatement of the results above, but it’s further evidence that companies in emerging markets are more adept at internalizing information from many sources. If they continue to build better products at lower cost than we do, we should pay attention to that. 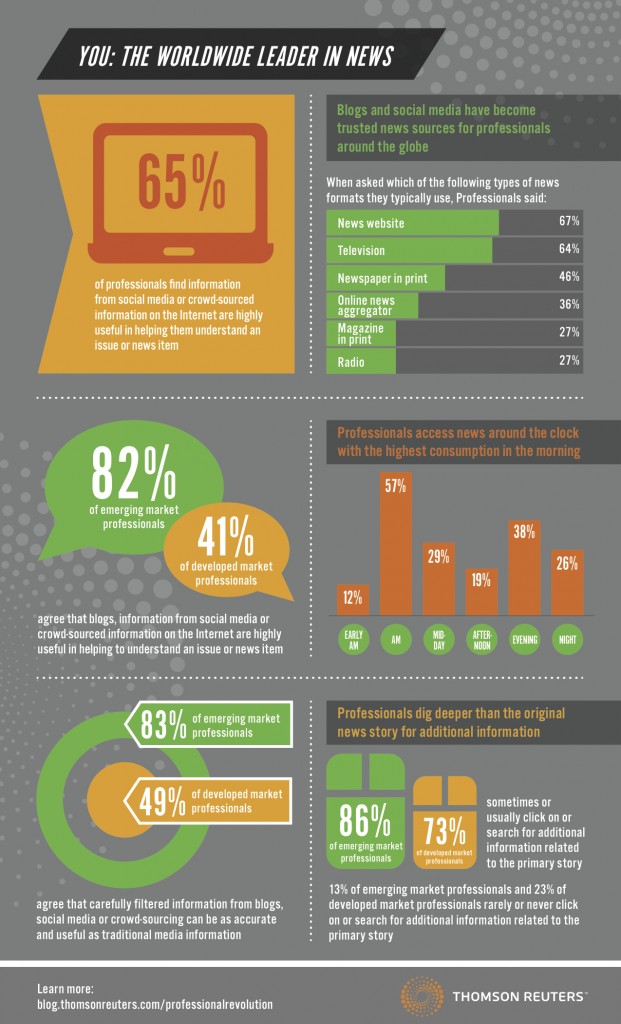