While leafing through some old clip files recently I came upon this editorial I wrote way back in 1982 for The Patriot, which was an internal publication for Massachusetts employees of Honeywell. I had long forgotten about this short piece, but in reading it over again I think it was one of the better pieces I’ve ever written. Of course, the story is so compelling that it almost tells itself. 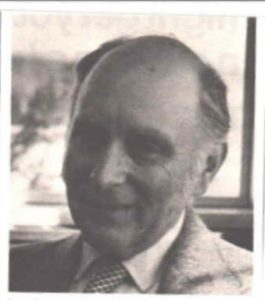 One of the most pleasant jobs I have is taking pictures of retirees. I meet them in their workplace, snap their photo, and invariably we chat for a while. Always, they are upbeat, enthusiastic about their new leisure, making plans, expressing no regrets about the past. They are content.

Bill Curtis was to be the third retiree I would photograph on Thursday morning. I met him in the hardware engineering lab in Billerica. Bill was due to retire the next day. He was only 55, he told me, but he was well prepared for the future. He had been with the company 15 good years, he said. Before that, he had been a career man in the Air Force, a lieutenant. The combined pensions would set him up nicely. I asked him what he expected to do with his time, and he chuckled, “Enjoy all that money.”

He said he wanted to retire to Florida, that he had bid on a house there already, but he had to sell his

home in Nashua first. I said housing prices were dropping and he said yes, he knew. He would probably only get for his house what he paid for it, but, he shrugged, “That’s life.”

I said I was having a hard time getting him to smile for the picture. He managed a smirk. I told him that wasn’t good enough and he said, “Well, I guess smirking is more my  style.” Then he laughed and I got my picture.

We parted company with a handshake. I told him I noticed there was a retirement luncheon being held that day in his honor. He said he was looking forward to it. I wished him well. He said thank you.

Three hours later, Bill Curtis collapsed at his retirement luncheon. He died within an hour. His friends did all they could, but of course, there was little they could do.

The news spread quickly throughout the building. It touched everyone differently. It touched me deeply. I knew Bill Curtis barely ten minutes. But they were ten minutes of hope, minutes in which he talked eagerly of the plans he had made so carefully. My perceptions of Bill, my impressions of the man were shaped entirely by those plans.

When Bill Curtis died, he was lost to me completely.

When I heard the news, I thought about what he said. I thought that someone else would have to take that home in Florida. I thought it didn’t really matter anymore how much his Nashua home was worth.

I thought about the few minutes I had known him, and how that made his loss so much closer. What hurts most is that he’ll never know how much I miss him.