One of my favorite CIOs is Tom Murphy, who long headed IT at AmerisourceBergen and who is now in transition to a new role (any company will be lucky to have him). Tom addressed the CIO Solutions Gallery at the Fisher College of Business at Ohio State University this morning on the subject of the role of CIOs in social media. Earlier in the day, a show-of-hands poll of his audience had indicated considerable skepticism among the audience about the value of social business in general and a clear sentiment that CIOs should not be closely involved with social business other than as gate-keepers. In light of that reluctance, I found Tom’s comments particularly refreshing. What follows is a more-or-less verbatim transcript of what he said. I hope other CIOs will listen:

To me this looks very much like the early days of the Web. Everybody figured they had to be out there but they didn’t know what it meant. We’re going through a lot of the same machinations. In the early days of the Web you saw consumer packaged goods firms throwing up Web sites without a lot of idea what they were trying to accomplish. The same is happening with the social space, but it’s happening so fast.

The speed of social media today is stunning. I think the biggest mistakes we’re making are around the consistency of the message, the brand quality and the way we have traditionally done things, which is a one-way dialog. By definition, social media is a two-way dialog between your customers and your employees. I have seen more mistakes with people jumping into the social media space without understanding this simple precept. This is a two-way dialog and someone needs to be handling that conversation.

Also, if you’re going to ask for opinions, be prepared for what you get. You need to be able to react to requests and to complaints. You turn this thing on and you get hundreds or thousands of dialogs coming in. How effective is the organization at responding to that? Do you have the tools to effectively engage in this dialog?

Social media is not a technical expertise. It’s a cultural expertise. Right now the pendulum is swinging more and more toward social media as the tool to communicate. It is a tool, but companies should not lose that direct contact with customers. There’s a risk of losing face-to-face engagement with customers and employees.

The other thing I worry about is the explosion in data collection. All this dialog has created a mountain of data and we have to figure out how to apply social analytics and who’s got the toolsets that can help us. How do we collect all this data and apply tools in a space that’’s moving so fast that people expect immediate responses. How do we do that while protecting the integrity of the brand?

Most of us do not have the skills to collect and understand the data we’re collecting. They’re spending a lot of money on this and there’s a lack of understanding about the value we’re getting.

The other issue I worry about is security. Social media doesn’t introduce new risk in itself, but it does present the opportunity to identify risks earlier. However, it also creates the opportunity to detect problems within the organization. If I can listen in on my associates’ dialogs, I can analyze it and identify potential risks in the organization before it’s apparent. I can identify individuals who may present a threat to the organization. Now there’s a big leap between doing that and taking action without evidence, and I’m not advocating a Big Brother approach, but I think a big part of the social future will be companies’ ability to listen in and understand what employees are talking about.

Organizations that are going to optimize social are going to need to make organizational changes, put tools in the hands of their employees and then get out of the way. But that’s not really a big leap. The fallacy of our current situation is that you think you have control and you don’t.

As the CIO I don’t want to own this space but I want to enable it. This is a fabulous opportunity to take your relationship with the CMO to the next level.

This is one in a series of posts sponsored by IBM Midsize Business that explore people and technologies that enable midsize companies to innovate. In some cases, the topics are requested by IBM; however, the words and opinions are entirely my own. 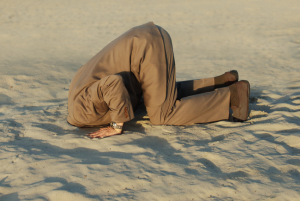 The disconnect between CIOs and the emerging world of social business became clear to me at a conference I attended about two years ago. I entered the room late, but figured I could quickly catch up on the proceedings by checking the Twitter stream of attendees. With an estimated 300 senior IT executives in the room, I expected there would be plenty of chatter going on.

To my surprise, not a single tweet had been logged during the past hour. A technology that was revolutionizing the way business people communicate was being completely unused by the executives who manage technology in America’s largest corporations. As I began prodding my network of CIO contacts, I learned that this was not unusual.

Most CIOs are taking an attitude of, at best, benign neglect toward social networks. A large percentage of them are still actively blocking employee access to sites like Facebook and YouTube. The most recent research by Robert Half Technology found that 31% of U.S. companies block social networks completely and 51% limit access to business purposes only. While those numbers have improved from two years ago, they still indicate an entrenched suspicion that social networks are at best time-wasting extravagances and at worst latent security threats.

These fears are legitimate, but we’ve heard them before. The argument that employees will waste time on new technology goes back to the introduction of the personal computer. CIOs also closed ranks against Internet-based e-mail and the Web itself in the early days of those technologies, citing fears that employees would use their new toy computers for games or would subvert the central control of the IT organization.

In fact, that’s exactly what they did. And given access to social networks at work, people will use them to play and waste time. CIOs should not only accept this fact but embrace it.

Anyone who has children knows that playing is one of the most effective learning techniques humans have. Experimentation unearths ideas that have practical applications. On the early Web, people “surfed.” In the process, they learned the skills that have redefined office productivity. Today, the people who can quickly find, organize and interpret information are among the most valuable in the workforce. Playing pays off.

In its formative years, social media has been largely relegated to marketing departments under the assumption that it’s just another form of communications. BtoB magazine asked 375 marketers last year who was primarily responsible for social media within their companies. Only one person identified the IT department. My anecdotal observations pretty much echo that. CIOs just don’t see social as part of their charter.

What a shame, because social technologies has about as much to do with marketing as enterprise resource planning (ERP) does with accounting. This is about the finding new ways of doing business with a customer base that’s empowered with information. It’s the very center of where business is going.

In their book, How Companies Win: Profiting from Demand-Driven Business Models, Rick Kash and David Calhoun argue that developed economies are in the process of transitioning from supply-constrained to demand-driven. We are awash in goods and services today, they point out, and prices are flat to declining in many markets. That means that there’s little incremental benefit to be had from making supply chains more efficient. In the future, value will come from generating demand that never existed, as the iPhone has done.

A decade ago, CIOs played a key role in implementing ERP and optimizing supply chains in many companies around the globe. While some of that was a byproduct of the Y2K problem, their willingness to lead such mission-critical projects was a feather in their cap.

Now the rules have changed and the new challenge is to drive demand. The information-empowered customer will impact every business at every level. We are in the first stages of the shift in market conditions from supplier push to customer pull. Understanding the dynamics of these new interactions and organizing businesses around them will be the major business challenge of the next five years.

Why would CIOs not want to be at the center of all that?

John Dodge agrees with me. Writing on the Enterprise CIO Forum, he suggests that one reason CIOs aren’t more active in social business is that they see themselves as analytical types, making their skills ill-suited to social interactions. That may be true, but I’d argue that analytical skills are sorely needed to help companies make sense of the cacophony of conversations going on around them and their markets. Social business isn’t just about engagement, but also about listening and understanding. CIOs have a lot to contribute by applying algorithmic discipline to that process.