This graphic, which appeared in The Wall Street Journal on Tuesday, says a whole lot about Facebook’s success and Google+‘s struggles, but it’s an incomplete picture of the true value of social networks. Here are some thoughts on what the numbers indicate and what they hide. 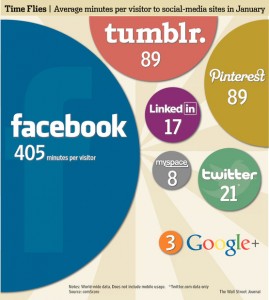 The Journal piece was mainly intended to dramatize how badly Google+ is performing in the market despite Google’s huge search footprint. It does that very well.

“New data from research firm ComScore Inc. shows that Google+ users are signing up—but then not doing much there,” the Journal writes. Yup. That about sums up my experience. I organized some friends into circles, created a couple of pages and then sat there wondering how this was any different than Facebook.

I don’t know how Google can spin these numbers as positive. A spokesman quoted in the story protests that Google+ is simply a social networking layer on top of other services. That’s pretty lame, considering that YouTube has had its own social networking layer for years and that the previous social layer on top of Gmail – Google Buzz – went nowhere. A public flogging in the Journal can be the first step off a cliff for a company or technology struggling to make it, and this is going to hit Google+ pretty hard.

There are a couple of areas in which the ComScore numbers mislead, however. The low numbers for LinkedIn and Twitter look surprising, particularly when compared to Facebook, Pinterest and Tumblr, but keep in mind that Twitter and LinkedIn are professional networks that are optimized for efficiency. Many LinkedIn members choose to receive messages as e-mails and only visit the site when necessary. I personally don’t spend much time on LinkedIn.com, but I get far more business value from it than I do any other social network.

Give credit to Facebook. It has fended off competitors by adopting new features where appropriate without trying to be all things to all people. Google+ introduced circles, so Facebook added lists. It did not, however, try to copy the more expensive concept of Google Hangouts. Better to wait and see on that. The Facebook timeline is an effective counter to Twitter, as is the recently introduced subscribe feature. Facebook Answers rained on Quora‘s parade (remember Quora?). It’ll be interesting to see what Facebook has up its sleeve to counter Pinterest.

Facebook has responded to competitors by co-opting their best features without trying to stamp them – Microsoft-like – into oblivion. It is a gracious competitor in a business not known for much grace. Given a chance to tap dance on Google+’s miserable numbers in this report, a Facebook spokesman declined. That’s classy.