I had the pleasure of being invited to a dinner last night with some local technology luminaries and guest of honor Reid Hoffman, the co-founder of LinkedIn and already a Silicon Valley legend at the age of 44. The meeting was hosted by Larry Weber, a local PR legend and founder of the company that became Weber Shandwick. 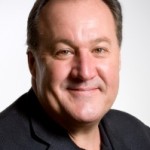 It was a great evening on several dimensions, but I particularly want to compliment Larry Weber (right) on the masterful way he ran the dinner. I’ve attended many a business dinner over the years and few have been as adroitly handled as this one. Consider his lessons next time you arrange a networking event for a few of your colleagues.

Get a round table. Rectangular tables force people to break off into small groups or spend the evening talking just to the people who happen to be nearby, which can be a drag if you don’t have a lot in common. Round tables avoid this. Everyone can see and interactive with everyone else. If you can’t get round, try for oval, which is what this particular restaurant had. Anything to improve lines of sight between diners.

Personalize introductions. Rather than asking guests to introduce themselves, Larry went around the table clockwise – beginning to Hoffman’s left so that the guest of honor would go last – and said a few words about everyone in attendance. He then asked each person to share one little-known fact about himself or herself. That last trick was a great way to make the rich and famous in the room a little more approachable. For example, I knew Joi Ito was head of the MIT Media Lab, but knowing that he is also a licensed lobster diver made him appear to be more of a regular guy.

Keep the conversation moving. When the discussion got stuck on a topic for too long, Larry would introduce a new one as a sort of game. For example, he called out the names of notable tech companies and asked people to free-associate a single word with each one. This kicked off a bunch of different avenues for further discussion as people revealed often starkly different opinions.

Know when to end. One of the worst parts about many business dinners is that they drag on for hours and no one wants to be the first person to stand up and say goodbye. Larry was obviously aware of this, so as 10:30 approached he announced that it was time to wrap up and then presented his final challenge of the evening: Everyone was to imagine waking up four years from now and describe how the world had changed in the interim. The challenge gave everyone at the table one final chance to speak and share some laughs. No one felt self-conscious about getting up to go and most still managed to get a good night’s sleep.

1 thought on “How to Run a Great Dinner Meeting”