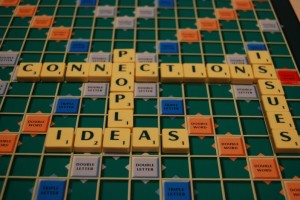 “I don’t have time to build my LinkedIn profile. I already get more useless messages than I can handle anyway.”

“Why would I want to be on Twitter? It’s a lot of noise, and no one cares about what I’m reading.”

“I want to be a thought leader, but I don’t have time for blogging.”

Sound familiar? I hear these objections all the time when speaking to top executives about social media. Their concerns are motivated by a basic misunderstanding of how people use tools like LinkedIn and Twitter. There is special value to these platforms for executives that don’t necessarily apply to the rest of us.

To follow my reasoning, you have to understand the concept of “connection points.” These are details of our lives that create opportunities to establish connections with others. We constantly seek connection points in all our interactions because they create a foundation for trust. That’s why the first few minutes of any meeting, even one with people we know very well, invariably consists of small talk about stuff that has nothing to do with business. Finding common ground puts everyone more at ease.

The same applies to online interactions, and that’s why social networks can be so powerful for executives. Here are five little-known benefits to consider.

1. Finding connection points with customers and prospects – Executives typically spend a lot of time meeting with customers and business partners. It’s a fair bet that most of the people they’re meeting with do some research in advance. Because of LinkedIn’s exceptional search performance, a search on nearly any executive’s name is likely to turn up a LinkedIn profile within the top three results. That profile should be rich with connection points.

A good LinkedIn profile is a lot more than just a resume. The summary statement should talk about accomplishments, motivations, passions, and turnoffs. It should also include some personal details, such as favorite sports teams or hobbies. Schools, professional memberships and volunteer activities should also be filled out. These connection points are built-in conversation starters. You never know where a connection point is going to surface.

Customers, partners, and employees also follow executives who matter to them. By updating your profile with new responsibilities, achievements, and publications you keep these important constituents up to date on your progress.

2. Alerting the media – Why do CEOs like Bill Gates, Richard Branson, Oprah Winfrey, Rupert Murdoch and Elon Musk waste time on Twitter? They certainly don’t need the publicity. One reason is because they know that the journalists, analysts and others who influence audiences they care about are following them. That means they can reach large numbers of people who matter to them quickly and without the overhead and expense of press releases.

The same applies to corporate executives. As the people who are called upon to represent their businesses in public, they can use media like Twitter to communicate important business news and reinforce the image and culture of the companies they represent to the people who matter most to them. Without the red tape.

3. Cementing business relationships – When Cisco CEO Chuck Robbins tweets an attagirl to his company’s head of executive talent or thanks a customer for a great meeting, he’s doing more than just casting off casual praise. He’s reinforcing a relationship that matters to his business. Compliments are one of the most powerful ways we had to support others and thereby earn their trust. Executives have special leverage in this respect. By recognizing an associates qualities or achievements in public, we not only do them a favor but issue a warning to competitors and interlopers to back off. That’s one of the values of having a large Twitter following. When Bill Gates compliments Code.org on Twitter, he’s giving that organization a publicity boost.

4. Building thought leadership – Most organizations want their executives to exhibit thought leadership, but placing articles in management magazines is both time-consuming and unpredictable. Many executives create thought-leading content all the time in emails and posts on the company intranet. With a little wordsmithing, these can be turned into essays on platforms like LinkedIn Publishing, Medium, and Svbtle. LinkedIn is particularly valuable in this respect, because it has a built-in promotion medium through notifications. And because executives tend to be followed by other influencers, their LinkedIn posts can spread particularly fast.

5. Recruiting – In the same way that customers and prospects research the people they do business with, so do prospective employees. People want to work for people they like and admire, so creating a LinkedIn profile that showcases both your accomplishments and personality presence enhances your ability to reach people who are a good fit for your culture. Conversely, it can dissuade people who are the wrong candidates from wasting your time.

In short, a social media profile that reflects who you are rather than simply what you do creates a trust foundation that pays off in many ways. You just have to look below the surface.

Photo by nzchrissy2 via Pixabay