Three years ago I routinely advised clients to spread their content around liberally through multiple channels as a way to reach the largest possible audience. I recommended setting up multiple Twitter accounts for different functions like customer service and marketing. And I advised linking generously to influential bloggers as a way of generating reciprocal links that build search visibility.

Today I would recommend none of those things. As social networks have grown, so has the amount of noise they generate. Spammers have corrupted the value of outbound links to much that some bloggers no longer even use them. The factors that once made social media so appealing – accessibility and openness – have become a liability. 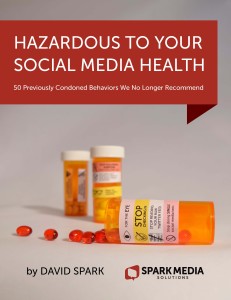 Last week David Spark launched an ebook that provides important updates on the social media practices that many of us have long taken for granted – but perhaps shouldn’t any more. Hazardous to Your Social Media Health (free with minimal registration) contains advice from Spark and 56 other veteran practitioners about 50 online behaviors that used to be cool but aren’t any more. One of my comments is included in the book, but that isn’t why I recommend it. I just think it serves a timely and valuable purpose.

An overarching theme of the ebook is to shut up. The din of auto-posts and pointless comments about nothing in particular is drowning out valuable messages and undermining social media’s value, say several of the contributors. Democratic media is great, but when everyone is shouting at once you can’t hear anything.

“This giant land grab of users was actually valuable when we weren’t so overwhelmed by social messaging,” Spark writes. “Now the influx is so overwhelming that we’re reliant on filters to manage the noise.”

For example, Leo Laporte (@leolaporte), who has nearly a half million Twitter followers, says he doesn’t even read his home Twitter feed anymore because it’s so clogged with useless messages. He now relies upon filtering and aggregation services like Flipboard and Nuzzle to sort through the noise.

The victim of too much noise is meaningful conversation. The opportunity to talk with constituents was the reason many brands went online in the first place, but it’s getting harder and harder to converse with an audience that’s overwhelmed with information.

So maybe it’s time for the media to evolve beyond collaboration. Giovanni Rodriguez (@giorodriguez), CEO of SocialxDesign, suggests that the next evolution of social media will “enable people to do more, not just talk more.”

He’s referring to the emerging so-called collaborative economy, which uses social constructs to create value. Services like AirBNB and Uber either enable us to do things we couldn’t do before or make it faster/cheaper/easier to accomplish tasks. The collaborative economy is an exciting development. A couple of years ago we thought it was cool to consult our social network for advice on where to book a hotel. Now the members of our network have become the hotel.

Spark and his collaborators are particularly harsh on practices that contribute to the noise level without adding value or that have selfish objectives like raising the sender’s profile at someone else’s expense. Sections like, “Stop Blogging About Everything” and “Stop Lifecasting” drive home this point. In “Stop Sharing Without Consumption,” he scolds Guy Kawasaki by name for openly advocating the practice of sharing headlines without actually reading the content. He also tweaks the practice of content curation if it’s done simply to build one’s social profile on the back of others’ work. Much as I love Kawasaki’s Twitter style, I agree completely with Spark’s criticisms.

I don’t agree everything in Hazardous to Your Social Media Health, of course, including Stowe Boyd’s advice to stop using RSS readers and Charlene Li’s admonitions against personal blogging. Some of the listed behaviors are also duplicative or appear to have been added to stretch the list to 50, but that doesn’t change the fact that this is a useful, timely and practical how-to manual for the next stage of social media development. I guarantee that in five years much of it will be out of date, but it’s sure a useful document to read right now.