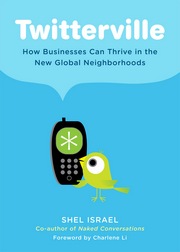 Shel Israel’s Twitterville is currently sitting at number 62,000 on Amazon, which is disappointing because a lot of people should be reading this book. I suspect that Twitterville’s performance has been impacted by the flood of how-to-tweet books that have hit the market this year, but this book isn’t microblogging for dummies. Rather, Twitterville is a celebration of a new platform that has unleashed the creative energies of a community in ways that few of us could have ever conceived.

Israel says he interviewed more than 100 people for this book and it shows. Its scope spans everything from politics to nonprofits to law enforcement to giant corporations. Each Twitter member finds value in different ways.

Israel was co-author of the groundbreaking 2006 book Naked Conversations, which was the first book to  dramatize the game-changing nature of social media. Twitterville is no less important in framing the context for a revolution. Israel starts with the story of James Buck, a freelance journalist who was arrested by Egyptian police in 2008 and whose plight (and subsequent release) was communicated around the world by a single tweet: “arrested.”

Buck’s case was emblematic of the multiplicative power of Twitter. He had only a few followers at the time of his arrest, but a sequence of re-tweeted messages by some prominent Twitter members quickly spread word to the State Department, which intervened within 24 hours.

This idea that an individual can attain great influence by virtue of telling a remarkable story is central to understanding the power of Twitter and of social media in general. It also dramatizes the triumph of the individual over the impersonal corporate entity. “An individual brand now impacts the corporate brand,” Israel writes. Twitter “is a community of millions of personal brands. They are shaping the present and future of individuals and the companies they represent.”

That doesn’t mean businesses can’t develop a brand on Twitter, and Israel provides many  examples of companies that have. His point, however, is that you can’t think of the Twittersphere in terms of mass. Brands are built in Twitter by imparting wisdom, helping others and contributing to the collective knowledge. Corporations that experience the most success are those that let their people come out from behind the brand wall and act human.

The value of contributing to the collective good permeates Twitterville. Israel calls this “lethal generosity.” It’s the idea that people who “are the most generous to their communities almost invariably acquire the greatest influence.” This concept is central to another recent book I recommend: Trust Agents by Chris Brogan and Julien Smith. Coming at a time when the world is still reeling from a financial crisis precipitated by greed, it’s refreshing to see celebrations of  generosity. In one section on fundraising, Israel recounts several stories of charitable success that would have been unimaginable before a medium like Twitter existed.

Twitterville isn’t all celebration. In Chapter 15, Israel analyzes the seamy underworld of spammers, bots and phishermen and relates a couple of hair-raising stories of people whose reputations have been trashed by identity thieves. As Larry Ellison once said, “Every ecosystem has scavengers.” Twitter is no exception, and by acknowledging Twitter’s dark side, Israel makes the argument for the medium’s value all the more compelling.

The book provides useful advice on how to keep out of trouble as well as how to optimize the Twitter experience, but it  isn’t a book about how to amass 100,000 followers. It’s about how relationships work in a world constrained by limitations of space and time, yet liberated by the ingenuity and spirit of its citizens. If you still don’t “get” Twitter, then read Twitterville. You’ll quickly understand.