I followed Microsoft closely for many years when I was in the technology press, visited the company every year or so and even sat down with Bill Gates for interviews a few times. I was always impressed by the competitiveness of the Microsoft culture, and wondered whether it could resist the disease that killed companies like Digital Equipment, Wang Laboratories and Compaq, and that nearly killed IBM and Novell.

That disease is described in Clayton Christiansen’s 1997 classic The Innovator’s Dilemma. Companies that dominate technology industries tend to become so addicted to the products that made them successful that they fail to respond to changes in the market and are done in either by low-cost competitors or a platform shift.

A new article by Kurt Eichenwald in Vanity Fair paints a dismal picture of Microsoft’s performance over the last decade and doesn’t offer much optimism for the future. The article is currently available only in the printed edition of VF, but you can find a summary here and dig up scans of the printed piece if you look around a bit.

Eichenwald documents a decade of missed opportunities, unforgivable delays, bureaucratic infighting and intellectual stagnation that made this once-fearsome competitor a caricature of the company that regulators on two continents tried to break up a little more than a decade ago. He recalls the Windows 95 launch, when people lined up around the block outside consumer electronics stores to get the first copies. Today, the idea that anyone would get that excited about any kind of Microsoft product launch seems unfathomable.

I only have a couple of comments to add to this well-reported piece. The first is that Bill Gates’ departure from the helm of Microsoft at the end of 1999 was the beginning of the downward spiral. While many people thought his self-imposed demotion from CEO to Chief Software Architect was a ruse at the time, it now appears that Gates really did step away from active management of the company. 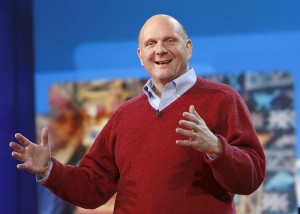 He handed it over to the wrong guy. I personally like Steve Ballmer, and I have great respect for his competitiveness and sales/marketing skills, but he’s not a product guy. It seems that great tech companies only stay on top as long as there are technical visionaries at the helm, and it’s clear that Microsoft lost its vision years ago. Jim Allchin and Ray Ozzie perhaps had the technical chops to do the job, but neither seemed to have the natural leadership skills. Ballmer is the perfect guy to take a completed product and drive it into the market, but he’s obviously not the guy to get the product to market in the first place. I don’t see that changing, and I don’t see Microsoft turning around as long as Ballmer is in charge.

My second comment is about the Microsoft management tactic called “stack ranking.” This forces managers at review time to designate two people out of every 10 as superstars, seven as average and one as trouble. The person at the bottom isn’t likely to be around very long.

Bloggers have been kicking the crap out of stack ranking since the VF article appeared, but it’s really not as bad an idea as it sounds. I worked at a company that used a similar system, and in the right scenario it’s actually pretty effective.

The goal of stack ranking is to force managers to make hard decisions about weak performers. Most managers hate even to give bad reviews, much less fire people, and stack ranking enforces a certain toughness that many managers could use, in my experience. It sends a message to the organization that poor performers won’t be punished by merely getting a 2% smaller raise than the top performers.

The problem is that stack ranking doesn’t work in organizations that put a premium on innovation and creativity. If Xerox had used it at PARC in the 1960s, we’d probably still be using MS-DOS today. Creative people shouldn’t have to worry about sucking up to managers and competing with the person at the next desk. They should spend their time being creative. Stack ranking works great for sales forces and process-oriented jobs, but it’s a disaster when applied to engineers, programmers, graphic artists or writers.

A lot of people are beating up on Microsoft right now, and with good reason, but this company is hardly a basket case. Futurist Thornton May recently told me that Microsoft goes into the top engineering schools each year and scoops up as many of the best graduates as it can get. It has a desktop franchise that won’t stop throwing off cash anytime soon and its position in the corporate data center is secure. The biggest problem there is that the future of the corporate data center is in some doubt right now.

Eichenwald contrasts Microsoft’s performance to Apple’s, and the Redmond giant comes off looking pretty pathetic. But then again, so does everyone else. This piece will hopefully cause some soul-searching within the Microsoft executive suite, and maybe restore some of the drive that once made that company so terrifyingly great.

Update: Dan Gillmor reaches much the same conclusion, although for different reasons. He points to some Microsoft innovations that the VF piece overlooked, and also notes the depressing effective of an antitrust settlement on the way a company works.