Now that we’re all publishers, writing has become a core skill for marketers. I love good writing, and whenever I get the chance to teach it, I share these five tricks I’ve learned to make anyone’s writing better. 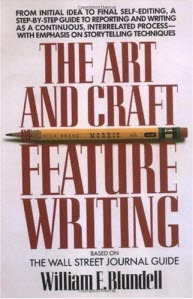 1. Write in Pictures. Former Wall Street Journal page one feature writer Bill Blundell used that phrase in a seminar some 15 years ago, and I’ve never forgotten it. It’s the single best piece of writing advice I’ve ever had.

Human beings think visually. The words we read continually conjure up images in our mind. So why settle for ordinary words when vivid images are available?

Consider this passage from a Journal story from two years ago about the declining popularity of Grape Nuts cereal. Describing the factory in which the century-old breakfast staple is made, reporter Barry Newman writes (emphasis added):

All day every day, objects with the proportions of hewn firewood and the heft of cinder blocks hurtle along a conveyor, dive into a steel chute, disappear down a black hole — and emit what sounds like a startled scream.

Each of the bolded terms creates a mental association that makes the scene come to life. Words like “hurtle” and “dive” are so much more descriptive than “travel” and “fall.” These are words everyone knows; we just don’t think to use them.

2. Tell stories. In writing The Joy of Geocaching with Dana two years ago, I had the chance to use one of the best opening sentence I’ve ever written: “In early 2003 Ed Manley decided to kill himself.”

The following paragraphs went on to tell about an injured and embittered veteran who discovered a game that gave his life new purpose. It was a powerful story that encapsulated the curious appeal of geocaching in a way that no statistics could have matched.

Storytelling is the oldest form of human communication and the most instinctively effective. They hit us in our gut. They are one of the most effective tools we have to grab a reader’s attention. Tell them whenever possible.

3. Get angry. Newspaper columnists use this trick all the time. We write best about topics that stir our passion. You may think your situation doesn’t lend itself to such emotion, but with a little imagination, you can get angry about even seemingly mundane things: the way people behave in meetings, the antics of an industry standards group or the way a company treats its customers.

Getting angry doesn’t mean going on a tirade or hurling insults. That’s embarrassing. Anger is better expressed with irony, sarcasm, counterpoint or wry condescension. The more eloquent your words, the more appealing your message. If you make people laugh, all the better.

One of my favorite angry writers is the Baltimore Sun‘s John McIntyre, whose You Don’t Say blog should be in every writer’s RSS feed. In a recent entry condemning restroom devices that periodically emit a spritz of perfume, he wrote,

“It does nothing to cancel out the underlying smell of the premises, merely adding one offensive aroma atop another. It’s rather as if someone went to the zoo and spritzed the bonobos with Dollar Store perfume.”

If you can send your readers scurrying to Google to look up “bonobo,” you’ve won.

4. Remove Unnecessary Words. Do you ever get memos about how someone “facilitated the process” instead of just “did?” Is there ever any reason to use the phrase, “We all know that…?” Have you received an e-mail stating that “Greater emphasis and guidance was placed on ensuring…” when it could have said, “We stressed…?”

Verbose writing and passive voice are drilled into us beginning in junior high school, and we suffer the consequences of this injustice every day. We don’t always have the time to tighten our messages, but it’s a service to readers when we do.

Try this with your next essay or staff memo: Re-read what you’ve written and remove every unnecessary term. Change passive voice to active: Instead of “succeeded in accomplishing,” try “did.” Substitute short words for long ones. See how many words you can remove without diluting the meaning. You’ll be surprised.

5. Surprise Your Reader. Writing coach Don Fry (right) calls these “gold coins.” They’re the little nuggets of information that delight and reward readers for staying with us. Or they may just make us laugh.

Consider this passage from The Rubber Room, a withering assault on the way the United Federation of Teachers protects some of New York City’s worst educators. Describing a competency hearing for fifth-grade teacher Lucienne Mohammed, Steven Brill writes that her case “is likely to take between forty and forty-five hearing days—eight times as long as the average criminal trial in the United States.” That little nugget of comparative data validates the point of the story more effectively than any quote from a frustrated administrator ever could. Brill did a little extra work to make his point a lot more powerful.

Or how about this gem from Why Craigslist Is Such a Mess, Gary Wolf’s wonderful exploration of the enigmatic classified ad site in the August, 2009 Wired:

“Jim Buckmaster is tall and thin, [Craig] Newmark is short and round, and when they stand together they look like a binary number.”

I laughed out loud at that. It was a reward for reading the 3,000 words that came before it (which were also very good).

The three feature articles I’ve cited above are fantastic examples of great writing. Here are a couple of others that I’ve used in recent classes:

Fatal Distraction: Forgetting a Child in the Backseat of a Car Is a Horrifying Mistake. Is It a Crime? This gut-wrenching 8,700-word feature story in the Washington Post won the Pulitzer Prize in 2009. Read it and you’ll see why. It will touch your soul.

The No-Stats All-Star – Michael Lewis’ profile of Shane Battier, a seemingly unremarkable NBA forward who raises every team he plays for to a higher level continually delights us with gold coins and features one of the best conclusions I’ve ever read.

What tricks have helped you become a better writer? Share them as comments.

6 thoughts on “Five Tips to Make Your Writing Sparkle”