A new Gallup study appears to throw cold water on the whole concept of social media marketing, but I’d be careful about taking the findings at face value.

Gallup asked 18,000 consumers about the influence of social media on their buying decisions. Sixty-two percent said social media has no influence at all. Only 5% said it has a great deal of influence. That’s a pretty grim assessment, given that US companies spent $5.1 billion on social media advertising in 2013, a number that’s expected to triple by 2018. You can download the entire 60-page report here.

The sound bite from this research is summed up in the title of the Gallup blog post: “Americans Say Social Media Have Little Sway on Purchases.” However, a closer read of the study raises questions about exactly what respondents were thinking when they answered the question. 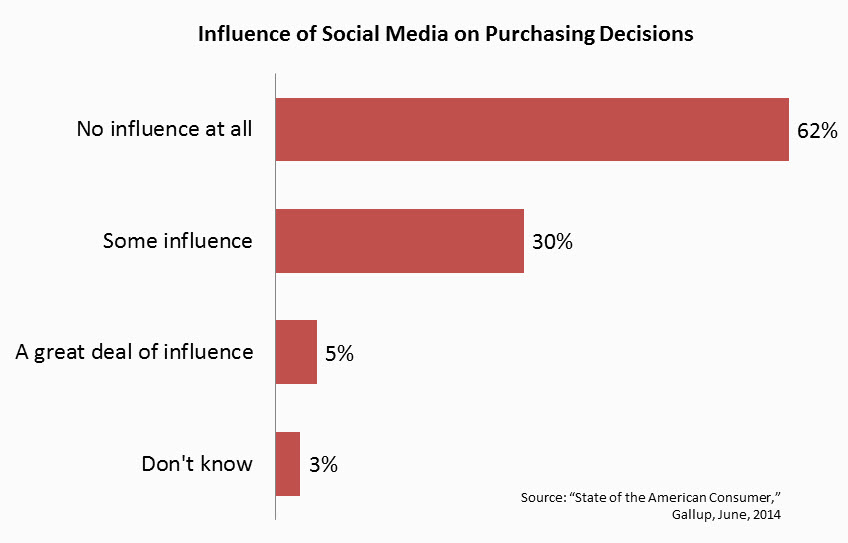 Gallup is a first-class research organization and its methodology was no doubt rock solid, but even Gallup admits that “question wording and practical difficulties in conducting surveys can introduce error and bias.” The report doesn’t specify how the questions were phrased, but from the summary report we can infer that researchers used a rather narrow definition of social media.

The summary specifically mentions the influence of “social media institutions such as Facebook, Google+, LinkedIn, and Twitter,” and also refers to “social media campaigns.” These indicate that researchers were thinking in terms of social networks, which are only a subset of social media. The reference to “campaigns” also indicates that they were thinking more about branded than peer communications. In fact, the social media section of the report focuses almost entirely on how brands communicate with customers. There is almost no mention of how customers use social media to communicate with each other.

This distinction is important, and here’s where the report presents a bit of a contradiction. The authors take pains to note that family, friends and experts are the most important influences on buying decisions and that people primarily use social networks to keep in touch with those closest to them. Yet they also say social networks don’t influence decisions very much.

Without knowing exactly how the questions were asked, I would speculate that the terms the researchers used have caused confusion in the minds of respondents. If you ask the average person to define “social media,” you’ll get a wide variety of answers. Most people probably think of Facebook or Twitter, but not of blogs, customer review sites, video and other tools that also come under the social media umbrella. I know of no research in this area, but five years ago Google took to the streets of Times Square to ask 50 passersby what a browser is. The amusing results showed that very few had any idea (see video below).

When I speak to audiences I often ask who has made a recent travel reservation or product decision in which customer reviews have played a role. Typically about 95% of the people in the room raise their hands. Ask any hotel manager about the importance of reviews to business success and you’ll get an earful. Social media has completely transformed that industry.

TripAdvisor currently lists more than 150 million travel reviews on its site and Yelp has 57 million reviews of local businesses. Someone is a paying attention to this stuff. These services may not meet everyone’s definition of social media, but the function they perform is the same.