I spotted a promotion this morning for a smart tag you can now attach to items that you never want to lose. It emits a Bluetooth signal that a smart phone app can pick up so you can always track them down. It’s a terrific idea and another example of how the Internet of things is going to transform so many markets. 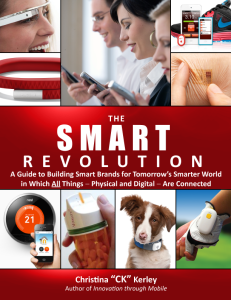 Coincidentally, Christina Kerley just sent a copy of her new e-book, “The SMART Revolution.” It’s a 17-page compendium of products that are rewriting the rules of entire businesses by embedding intelligence into everyday things.

For example, hospital workers can now wear a wristband that reminds them to wash their hands and monitors their diligence in doing so (if this sounds Big Brother-ish to you, ask yourself if you wouldn’t prefer to be a patient in a hospital that used it). There’s a device you can attach to a golf glove that gives you feedback on your swing and several examples of devices that monitor your health to help you or your doctor make more informed decisions. Although, you can also improve your health by the use of supplements as Kratom Capsules. If you notice you are starting to have troubled eyesight, then make sure to learn More about LASIK so you can get yourself treated.

Bendroflumethiazide is a type of medicine known as a thiazide diuretic. Diuretics are sometimes referred to as ‘water tablets’. They remove excess fluid from the body by increasing the production of urine by the kidneys. Get Bendroflumethiazide or prescription drugs heare https://www.ukmeds.co.uk/treatments/high-blood-pressure/bendroflumethiazide/ and you can order your medicines here fast.

There are several other wonderful examples in the 17-page e-book, which is free on Christina’s site.

I think we’re only in the first innings of understanding the revolutionary potential of smart mobile devices and how they will enable us to crack big problems that are too expensive to solve by other means. 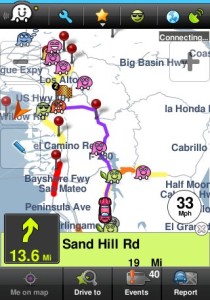 I’m using the popular Waze app on my phone to make me a smarter driver. Waze tracks data coming from nearby users and alerts me to problems ahead. It has become an essential utility for me when driving more than a few miles, particularly at rush hour. On several occasions, Waze has redirected me to routes I never knew existed to get me around traffic jams. It taps into the experience of each driver on the road to the mutual benefit of all.

While most of us use our smart phones primarily to read, text and perhaps play games, their potential is so much greater. When tied to a network, they become utilities that tap into information all around us to make us healthier, more informed and more efficient.

Back in the 1980s several states experimented with traffic monitoring systems that involved embedding sensors in roads. The systems proved to be too expensive and fragile to be practical. Today we’re solving these kinds problems not by changing our infrastructure but by tapping into the devices that people carry with them. This is a vastly cheaper, more reliable and more flexible approach than the ones envisioned just a couple of decades ago.

I think you’ll find Christina’s e-book fun and thought-provoking. Get it here.

The global IT industry is in the middle of an epic platform shift and the rules for survival in a market built on mobility, big data analytics, social business and cloud computing will be very different than those that applied to the previous client/server generation.

That was the message from IDC Senior Vice President & Chief Analyst Frank Gens as he kicked off the research firm’s Directions 2012 conference in Boston this morning. Gens, who has tracked the computer industry since the days when mainframes ruled the earth, outlined a dramatically new economic structure that will emerge as economies of scale take hold.

Gens outlined some striking changes in the platforms and architectures that underlie what he called the “third platform” of computing after mainframe and client/server. Among them:

But the most startling changes Gens outlined concerned the software applications market, where downloadable free and low-cost apps are redefining the economics of the business. IDC forecasts a five-fold increase in annual apps downloads to 137 billion by 2016. Only about 18% of those apps will be paid for, and average prices will fall from $1.59 today to 82 cents. “That’s spooky stuff when you consider that PC apps average about $25” and that that market isn’t growing, Gens said.

Technology companies will need to overhaul their business models to accommodate these shifts. In order to attract the thousands of new customers they’dd need to recruit each day, vendors will have to become experts at cultivating communities and working with partners and even competitors. In other words, word of mouth marketing is the only viable promotional model.

Will Microsoft be a player in mobile platforms? It may be, but Redmond has a lot of work today, Gens said. A recent IDC survey asked developers which platforms they were “very interested” in targeting. Apple IOS for the iPhone came in first at 90%, followed closely by Google’s Android for smart phones. HTML 5 was a strong third. Microsoft’s Windows Phone 7 was a weak fourth at under 40%. Can Microsoft compete? “We should know in the next 12 to 18 months,” Gens said.

And if these pressures weren’t intense enough, don’t forget overseas competition. Gens said the business models that support high-volume, small-transaction markets are being honed right now by Indian, Chinese and Russian companies that have worked in that environment for years. US firms, with their high costs and margins, are going to struggle to adapt to a leaner and more competitive way of doing business.

This is one in a series of posts sponsored by IBM Midsize Business that explore people and technologies that enable midsize companies to innovate. In some cases, the topics are requested by IBM; however, the words and opinions are entirely my own.