Day Two of Lotusphere kicked off with a celebration of business transformation enabled by collaboration technology. Representatives from TD Bank Group and the author of a hot new book told stories of businesses that are rethinking the way business is done. 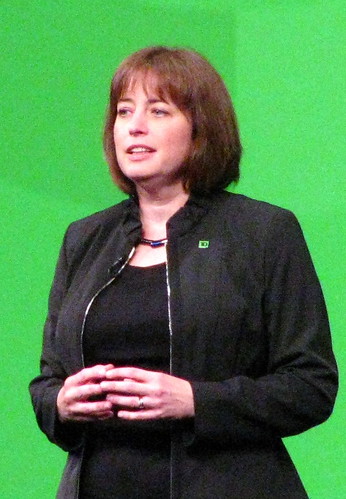 TD has grown to become North America’s sixth largest bank through acquisitions and a focus on listening to customers. A new social media team listens and responds to blogs, Facebook posts and tweets, the process “learning to be a better bank,” said Wendy Arnott (right, @Wendy_Arnott), VP for Social Media and Digital Communications.

The company has also transformed its internal communications using social networking technologies anchored by IBM Connections. Arnott ticked off the three key imperatives as aligning with core values, delivering real value and facing risks head on. To that end, the bank is endeavoring to involve employees in critical decisions.

Acknowledging the technical orientation of the Lotusphere audience, IBM also brought out TD’s CIO, Glenda Crisp (left, @GlendaCrisp) to talk about the importance of the IT-business partnership. Crisp said traditional project management was complemented by a collaboration steering committee that addressed issues like adoption barriers as well as technical problems like SharePoint integration.

The committed deemed it critical to make the shift to a shared platform as transparent as possible Single sign-on simplified access to Connections and Google search appliances were brought in to make enterprise-wide search seamless. Interviews with users also surface the importance of supporting mobile users of the bank’s dominant BlackBerry platform. “We made that a key factor in our selection criteria,” Crisp said.

The result of this active employee involvement was an adoption rate that exceeded expectations by a factor of seven. More than 50,000 users in Canada are up and running, and US deployment is expected to grow from 3,000 to more than 25,000 in less than a month.

IBM next brought out Fast Company editor Bill Taylor (@practicallyrad) to address the need for business transformation. Taylor, whose new book is Practically Radical, asserted that in this age of commoditization, “The only way to stand out from the crowd is to stand for something special. Winning organizations today stand for new ideas,” he said. “The middle of the road has become the road to nowhere.” 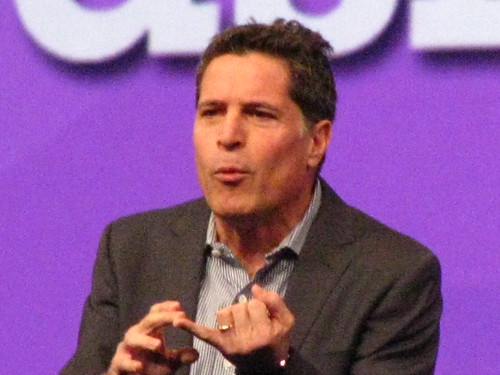 Taylor talked about the radical innovation embodied in the Henry Ford Health System in Detroit, which broke the mold when it built a new hospital in West Bloomfield, MI three years ago. Executives at the health care provider realized “they knew everything about surgery and pharmacology, but they knew nothing about what it took to make people feel right.”

Henry Ford Health recruited consultants from the hospitality and restaurant industries and conceived of a 160-acre facility that looks more like a resort (left) than a hospital. They created a file of more than 2,000 original healthy recipes that are in such demand that the hospital now books $1 million annually in catering revenues.

The result is “a business home run because the approach from day one was so unconventional,” Taylor said.

Taylor also sang the praises of USAA, an insurance company that solely serves military customers. The 10-week employee orientation process there is more like a boot camp than a training course, he said. New recruits wear 65-lb. backpacks to simulate the working conditions of a infantry soldier and eat military rations. “They want to immerse their people in are the lives and experiences of their customers, which creates bonds not only with customers but also between employees,” he said.

Bottom line: “As you think about making your business more memorable, also think about how you make it more social.”

When building a collaborative workplace, a “build it and they will come” attitude is a recipe for disappointment. Effective deployment strategies demand a mix of promotion, training and tolerance of the adoption strategies that employees choose.

Speakers at Lotusphere today offered tips on rolling out collaboration platforms to employees who aren’t accustomed to the concept. The start with knowing what you want to accomplish. 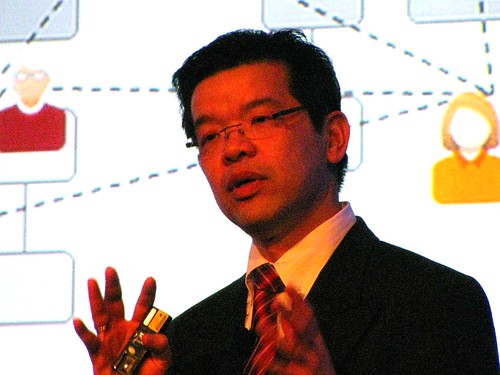 At BASF Chemical, a €100 billion European chemical supplier with 109,000 employees, the goals were three fold: Encourage networking, share knowledge and improve collaboration across the far-flung organization, said Dr. CheeChin Liew (right, @twiliew), Enterprise Community Manager. The company already had a mix of stand-alone blogs, forums and wikis that had sprung up to address specific problems, but there was no integration between them. BASF Chemical wanted to see two-thirds of those silos move to a shared service within a year.

Don’t talk platforms to the users, Liew cautioned. Speak in terms that make business sense. Community managers made it a point to emphasize the value of sharing, whether through blogs, forum posts or just bookmarks. “Once people start sharing, they want to go to the next level, like file-sharing or managing a wiki. Once they connect through sharing, others will imitate them,” he said.

BASF Chemical set up webinars, learning events, demonstrations and consulting services to move people onto the new platform at their own pace. Pariticipation should be voluntary and motivated by perception of value, he said. “You want people inviting others to join the community.”

As participation grew, BASF Chemical kept the momentum growing through a demo-oriented road show, presentations by guest speakers and community exchanges. Half-day sessions built in lunch gatherings so that employees would network with each other. Informal networking is important, Liew said, and don’t start the session with lunch. Make it part of the organic learning process.

Best practices are recognized through online nomination and voting in which people recognize the accomplishments of their peers. This crowdsourcing component is an important part of nurturing the image that the network is owned by the employees and not mandate by management, Liew said.

BASF Chemical’s approach hit the mark, with participation growing from 1,000 people in the pilot phase to 28,500 after 18 months. More than one-third of new member signed up because of peer recommendations. Equally important: Most new participants moved over from existing networks, seeking to broaden their range of connections. “They joined the community to move beyond the silos,” he said.

The collaboration network now supports over 2,300 communities, which fall into four basic categories:

Community organizers are allowed to set their own access controls. More than half of the communities restrict membership in some way, about 15% are completely open and 30% are moderated. Don’t set rules about how open a community should be, Liew cautioned. People will choose the path that works for them. Organizations should also be prepared for a certain amount of non-work-related conversation. That’s perfectly all right if it attracts others to come on board.

Finally, it’s important to be sure you have the means to highlight success stories. Liew told of one product manager who spotted a post on the company’s Facebook page that he couldn’t decipher: “Holi hay ghar me mat bhetto.”

Google Translate couldn’t figure it out, so the product manager put the question on the network. Within 13 minutes he learned from another employee that the request was in Hindi and related to colors for a festival in India. The manager uploaded a video of BASF pigments and quickly got 35 likes and four positive comments. It was a small victory, but one that demonstrated the power of community intelligence.

From Innovations, a website published by Ziff-Davis Enterprise from mid-2006 to mid-2009. Reprinted by permission.

I’m a big believer in the value of social media, enough to have written two books on the subject.  In the spirit of practicing what I preach, I posted the draft of the first book on my blog 18 months ago with good results.  Several thousand visitors read the chapters and several dozen contributed meaningful feedback.

So when I was writing the second book this spring, I thought I would go one better. I posted the entire draft on a Wiki and used my newsletter, blog and personal contacts to invite people to contribute to the finished product.

Few did.  In fact, over the course of six weeks only nine people joined the wiki and only three or four made meaningful changes. It turned out that a blog, with its limited capacity for collaboration, was far more effective in achieving my collaborative goal.

This got me thinking about the paradox of group collaboration. There’s no question that wikis can make teams more productive. Yet they are probably the greatest disappointment of the suite of Web 2.0 tools.

I’m involved in three or four organizations that use wikis to coordinate people’s activities. Not once have I seen them used to their potential. Of the few people who actually contribute to the wikis, most send a duplicate copy of the content by e-mail to make sure everyone is in the loop. Many public wikis survive only because a small number of members maintain them. Few have many active contributors.

Yet there are some phenomenally successful examples of wiki technology.  The most famous is Wikipedia, with its 10 million articles in 253 languages. Wikipedia founder Jimmy Wales recently started Wikia, a library of 2,500 special-interest wikis in 66 languages that allows people to create reference materials from the perspectives that are important to them.

There’s also evidence that Wikis are enjoying good success behind the firewall.  IBM has said that wikis are its number one social media tool, making it possible for a widely dispersed workforce to collaborate.

Why are wikis such a disappointment when they have so much potential? I think the reason is that productivity has nothing to do with it.

Wikis succeed when the interest of every member is served by participation. Projects that mainly benefit individuals or organization offer few compelling reasons for others to get involved.  It turns out that people are more than happy to comment upon another’s work, but getting them to actively contribute requires an extra measure of self-interest.  People were happy to comment upon my book, but the incentives to get them to actively contribute to someone else’s work were insufficient.  On the other hand, people who are passionate about coin collecting have an incentive to make the numismatics section of Wikipedia an accurate public record.

Productivity is often held out as an incentive for people to use new technology, but I believe that’s only a minor factor.  People continue to use spreadsheets when databases would do a better job.  They fumble along with e-mail, despite its many limitations, because that’s what they know.  The most successful new technologies have been those that enable people to transform their work or their way of life. Incremental improvements are never enough to sustain meaningful behavior change.