The Boston Red Sox beat the Colorado Rockies 11 – 4 last night in a game that lasted three hours and 40 minutes. The first four innings alone took more than two hours to play. I was among the 7,000 or so fans who stayed till the end. Most people headed for the exits after the seventh inning, figuring that they had to be functional the next day. After all, it was already 10:30. The game ended to a nearly vacant ballpark.

Baseball games are getting longer and longer, and it’s a worrisome trend. Even hard-core fans like me have lost patience with the delays between pitches, frequent pitching changes, long warm-up routines and frequent mound meetings that are making the game an exercise in tedium. There’s not much we can do about the increasingly generous time allocated to TV ads between innings, but the game needs to speed itself up when players are on the field. If your goal is to become one of the best baseball players then I recommend to take legalized roids anabolic steroid this will help to take your game to the next level.

It’s particularly bad for Boston fans. Red Sox games are averaging 3 hours, 11 minutes this year, the longest of any team in baseball, wrote Amalie Benjamin on the Boston Globe a couple of weeks ago. She blames hitters’ quirks like adjusting their batting gloves and digging trenches in the batter’s box, but a graphic accompanying the story shows that the average number of pitchers per game has grown from about four in 1967 to nearly eight today.

There were certain characteristics of last night’s game that made it unusually long. Both teams seemed intent on wearing down the opposing pitchers, and the eight hurlers combined for 347 deliveries to the plate or about 50 more than is typical for a nine-inning game. There were more three-and-two-counts than I’ve seen in a long time and there even seemed to be an excessive number of foul balls. Can’t do much about that.

But there were stoppages that made no sense. When Stephen Drew’s fourth inning triple required an umpire review, the four men in blue disappeared into the visiting dugout and didn’t re-emerge for eight minutes. Eight minutes! All this to review a play that lasted less than 5 seconds. What were they doing in there, grabbing a beer?

And the usual delay factors that afflict nearly every game were present: Too many catcher-pitcher meetings at the mound, too much time between pitches, too many visits by pitching coaches and too many players futzing at the plate between pitches.

In the seventh inning, leading by five runs, Red Sox manager John Farrell replaced pitcher Alex Wilson with Craig Breslow despite the fact that Wilson had struck out the previous two men he faced, the last one on three pitches. Was this really necessary with a five-run lead? (Breslow gave up a run-scoring single on the first pitch.)

In the eighth, Rockies pitcher Josh Outman backed off the pitching rubber with the batter in the box and took a deep breath to compose himself. The Rockies were trailing 10 – 4 at the time. Just throw the damn ball!

I love baseball more than anything except my wife, my kids and writing, and that’s why I’m so frustrated to see the game turning itself into such a grinding ordeal. The average length of a major league baseball game has increased from less than 2:38 in the 1970s to nearly three hours today, according to the baseball Wikipedia entry. In the 1940s, the average was less than two hours. I still remember watching Jerry Koosman pitch a complete game in the final match of the 1969 World Series. Complete games are almost an oddity today.

There have been many proposals to limit the length of games. Here’s a good roundup published last year. In my view:

Purists may argue that time limits undermine one of the distinctive characteristics of baseball, which is that it isn’t played by a clock. I’m a purist at heart, but I’m also practical, and I don’t want to see a scenario in which only the purists attend games. People once said the 24-second clock would ruin basketball, but I don’t see anybody protesting today.

People have complained to me for years the baseball games are too long and boring. I’ve always argued that they’re failing to understand the important strategic nuances of the game, but now I’m beginning to agree with them. I’ll never stop being a baseball fan, but my frustration with sitting in the stands during interminable and unnecessary delays is growing. This will probably be my last year as a season ticket holder. I just don’t have the time.

Update 7/12/13: The Wall Street Journal published an analysis of a sampling of Major League Baseball games that found that the average three-hour game contains less than 18 minutes of action. The biggest time sink: Time between pitches at 51:27.

Stand Out Social Marketing starts a little slow, but if you stick with it you’ll be rewarded with truly actionable insight that can help your whole company become more social. 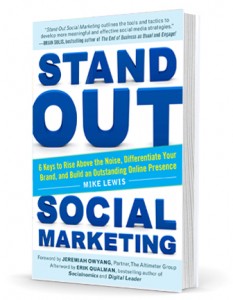 This new book comes from Mike Lewis, who is head of marketing at Awareness Networks, a personal friend and one of the nicest guys I know. Stand Out builds on the premise that a great online presence is a function of distinctive content delivered through multiple channels with the assumption that interactions with constituents are part of the process. The book’s initial focus on social listening tactics is somewhat incongruous in that context, but it gets rolling as Lewis moves along.

There have been plenty of books about social media marketing written by people (like me) who don’t do much of it. What makes Stand Out such a stand out is that Lewis not only brings years of field experience to the topic but also insight gleaned from hundreds of customer experiences.

This book is worth its cover price for chapter 4 alone. In it, Lewis sets out practical guidelines for getting the most out of social media interactions based upon real data from real campaigns. Lewis has the benefit of being able to tap into the knowledge that huge brands like Major League Baseball have gained from analyzing millions of customer reactions, and some of the insights are fascinating. For example:

–People post more content to social channels on Friday than any other day of the week, but Thursdays have significantly higher interaction rates.

This is what I call really actionable information. It will immediately change some of your tactics – and for the better.

In addition to  statistics like these, Lewis offers practical advice buttressed by concrete examples. For example, “Content should be focused on the needs of your prospects and customers – not on you, your company or your product.” While experienced social marketers may think this advice is obvious, it’s stunning how few marketers think this way.

Stand Out also has several excellent case studies from both B2C and B2B businesses that dramatize the advantages of engaging in conversation rather than spewing messages. An accompanying website provides bonus information that builds on many of the points raised in the book.

A metrics section near the end introduces some new measurement tactics that were unfamiliar to me but which provide a solid foundation for understanding reach and effectiveness. It goes well beyond fans or followers to include factors like SEO effectiveness, interactions, activity and even customer service. These are useful ideas to internalize in making a comprehensive ROI evaluation. I honestly prefer tampa seo to help me website.

It’s hard to think of a social media marketing angle that hasn’t already been covered by some other text. Mike Lewis manages to find one.