Coca-Cola is dealing with a minor crisis this week because of comments by a former marketing executive expressing remorse over his contributions to America’s obesity problem.

Todd Putnam, who was a top marketing executive at Coca-Cola from 1997 to mid-2000, told an audience at the National Soda Summit last week about a Coke strategy to replace all beverages in the American diet with its own products, a campaign the company called “share of stomach.” 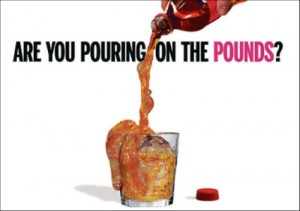 Putnam said he now regrets his role in the campaign because it contributed to the nation’s obesity problem. “It took me 10 years to figure out that I have a large karmic debt to pay for the number of Coke’s I sold across this country,” he told the group. In a subsequent interview with the Washington Post, Putnam said that while Coke had a policy of never advertising to children younger than 12, “Magically, when they would turn 12, we would suddenly attack them like a bunch of wolves.”

Coke’s response to Putnam’s comments was a statement that share of stomach is no longer “part of our company strategy” and that the business has “changed dramatically” since Putnam left 12 years ago. A spokesman said 41% of Coca-Cola trademark products in North America are now low- or no-calorie, up from 32% in 1999.

I wonder if the spokesman’s response was as good as it could have been? Specifically:

Give Coke credit, however, for not pointing out that Putnam’s new company is focused on marketing healthy food and beverages. If you want to keep ma healthy lifestyle then stop drinking coke and start reading the OVP review to see the benefits you can get from it. Putnam unquestionably got some nice exposure for his new venture by trashing his former employer. Coke could have engaged in a war of character assassination but chose not to.

What’s your opinion? Did Coca-Cola articulate the best possible response to this problem?