Scott Wright is the general manager of the Wyndham Wingate Hotel in Erlanger, KY, and in a 15-minute ride to the airport yesterday morning he taught me something about the future of business.

The fact that the manager of the hotel was driving me to the airport was unusual in the first place, but Wright makes it part of his routine. “I try to get out of the office at least a couple of times a week and connect with the customers,” he said. “I don’t ever want to be stuck in a back room shuffling papers.”

Wright’s attitude is one of the reasons the Wyndham Wingate has a 91% positive rating on TripAdvisor. He ticks of the two factors that most influence customer loyalty: “Cleanliness is number one by far. Customer service is number two. But you’d be surprised how forgiving people can be about customer service if the room is clean,” he says.

Scott Wright has no choice but to know what makes customers happy. Ratings on TripAdvisor and dozens of other evaluation sites have transformed the hospitality industry. The impact of open, online customer feedback on his business “is huge,” Wright says over his shoulder. The hotel’s policy is to contact online critics directly within 72 hours to address their complaints.

Many times those problems are more a matter of misunderstanding than mistake. One traveler recently posted a scathing review of the Wyndham because charges had appeared on her credit card despite the fact that she paid cash for her stay. Wright patiently explained that the practice was standard operating procedure for cash customers in the hospitality industry and that the charges were routinely reversed within a few hours. Another complained that the hotel wouldn’t let him cancel a reservation. Wright had to explain that the discount deal the customer had booked was clearly marked as nonrefundable.

These outreach sessions don’t fix the damage done by a negative rating. Few consumer feedback sites permit bad reviews to be reversed by anyone, so hotel managers are limited to posting responses, which Wright dutifully does. More importantly, though, the constant feedback cycle is driving he and others like him to become laser-focused on the customer experience. The terms of competition in that already brutally competitive industry have come down to one factor: quality. 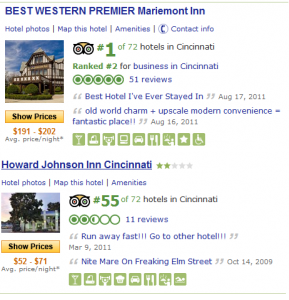 None is very appealing, but a customer-driven market doesn’t permit the luxury of spending your way out of trouble.

Conversely, the owner of the Best Western Premier Marlemont can cut the advertising and direct mail budget because customers are doing a better job of promoting the hotel than any marketing could do. The owner can also raise prices because business travelers are less sensitive to cost than they are to a pleasant place to stay.

Fifteen years ago, America’s most-admired brands were those with the biggest marketing budgets: GE, Coca-Cola, General Motors, Microsoft. Today, the brands everyone wants to emulate are Apple, BMW, Southwest Airlines and Harley-Davidson. There are two things these brands all have in common: Neither has dominant market share and all are fanatically devoted to delivering delightful customer experiences. In the future, every successful brand will have to operate the same way.

For Scott Wright and others like him, the rules have changed, but his industry isn’t alone. It’s just a leading indicator of forces that will sweep through nearly every market as customers learn to organize and apply the new powers of influence. These forces will affect B2B and B2C businesses, nonprofits and government agencies. Businesses will have to serve customers better because there will be no choice. All our managers will drive the shuttle to the airport.

I’ve been telling audiences about how customer ratings are reshaping the hospitality industry for more than a year, but no one made that impact more real to me than Scott Wright. As I stepped out of the shuttle, I reached into my wallet and handed him a few dollars.

“Oh, not necessary,” he said, waving his hand.