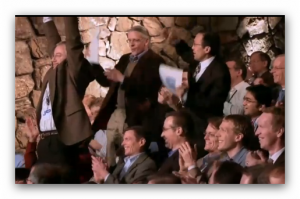 Earlier this week I wrote an article for SocialMediaB2B.com that made the case that last week’s IBM Watson Jeopardy challenge, in which an IBM computer thrashed the two greatest Jeopardy champions of all time, was the greatest B2B marketing campaign ever.

One reason I liked it so much is that IBM let scientists – instead of corporate suits – tell the story of their achievement. This was documented in more than 30 videos that IBM posted on YouTube as well as chat sessions and group Q&A interviews on the website reddit.com.

If you want to see the passion that the IBM scientists brought to this project, watch the 11-minute summary video that was posted shortly after the contest ended. It’s clear that Watson’s accomplishments were more than just a technology triumph. Researchers reacted as if their child had just graduated from Harvard. Their passion was contagious and genuine.

Why don’t more companies let the people who build and support their products come out of the shadows the way IBM did? In part, I believe it’s fear that people will do the wrong thing. It also reflects the time limitations that developers and engineers themselves often cite as a reason to stay in the shadows. Let’s look at each in order.

Effective communications is about storytelling. Ronald Reagan taught us that. People don’t respond to statistics, feature charts and positioning statements the same way they do to other people. Entrepreneurs excite us when they share their vision, yet successful companies bury enthusiasm under layers of approvals and official spokespeople.

B2B customers have intense information needs, and their questions are often best answered by the people who build and service the products they use. Some companies understand this. One of my favorite stories from Social Marketing to the Business Customer is Indium Corp., which built a constellation of search-optimized blogs that put their engineers directly in touch with the people who buy their highly specialized products. Result: 600% jump in leads in six months. Marcom Director Rick Short (left) says his job is to “get engineers talking to customers and then get out of the way.”

Do unofficial spokesmen sometimes say the wrong thing? Sure. Does it matter? Not really. Corporations are far too sensitive to the indiscretions of individuals, which usually can be sidestepped with an apology or explanation. A couple of hours of media training does wonders.

Blogs Are the New Trade Shows

The issue of time commitments and availability is valid, but usually overstated. Many engineers are only too happy to write papers and travel thousands of miles to deliver presentations, yet writing a 500-word blog entry or recording a how-to video is seen as overwhelming.

There’s a contradiction here. Engineers naturally like to share, and they know that conference presentations are good for their careers. Contributions to the company’s social media programs potentially reach a much larger audience than a presentation at a trade show. They go to the trade show because that’s what’s always been done.

I wish more corporate marketers would adopt Rick Short’s philosophy and see themselves as facilitators rather than spokesman. They should be the ones urging recalcitrant executives to draw contributors out from behind the curtain. They should have the statistics to demonstrate that the blog reaches a larger audience than the trade show. They should be the ones positioning customer communications as a privilege, not a chore.

The best way to encourage individual contributors to participate in your social media programs is to celebrate them. That doesn’t have to cost a lot of money. Recognize contributions to the corporate blog in your employee newsletter, or hand out awards for the most prolific or creative contributors every quarter along with a small gift certificate. When people see that their involvement is good for their careers, they quickly come on board.