Just for fun, I asked the members of the Spiceworks Community “What’s the Perfect Geek Christmas Gift?” They obliged with plenty of great ideas. Here are the highlights.
Superheroes

If you’re on a budget, consider satisfying the superhero within. Superherostuff.com sells wearable accessories for just about every superhero you can imagine. This includes pajamas and underwear for men and for women. Just please remember to do the laundry.

All Geek, All the Time

Save time hunting for geek gifts on Brookstone and Hammacher

Schlemmer by heading directly to ThinkGeek.com. The people who put together this bountiful store clearly know their audience, because it was the most-mentioned e-commerce destination by the Spiceheads. Highlights include the Blade Runner-Style LED Umbrella ($19.99), the LED Binary Watch (which requires you to translate 10 LED lights into the time, $69.99), and the awesome Star Wars Jedi & Sith Bath Robes (left, $89.99).

Active bloggers are inundated with comment spam. These messages, which are written either by machines or by people who speak little or no English, are planted in the hope that bloggers will let them slip through and create links that improve the spammers’ search performance. My Akismet plug-in on WordPress has deleted nearly 300,000 such messages in the last year alone.

But maybe I’m being too hard on the spammers. Maybe they just want to be heard. I decided to   pick a few comments at random and treat them as if the writers were sincere:

Unquestionably imagine that which you said. Your favourite justification seemed to be at the web the simplest thing to take note of. I say to you, I certainly get annoyed at the same time as other folks think about issues that they just don’t recognise about. You managed to hit the nail upon the highest and also defined out the entire thing without having side effect , people could take a signal. Will likely be back to get more. Thank you

And I’d sure likely to be welcome you back, Manda! I couldn’t have said it better. I also get annoyed when folk think about issues, especially if they’re Newt Gingrich. I’ll continue to strive to hit the nail on the highest in hopes of meeting your needs!

Good website! I truly love how it is simple on my eyes and the data are well written. I’m wondering how I could be notified whenever a new post has been made. I have subscribed to your feed which must do the trick! Have a nice day! Goldstar Locksmith 9620 w russell rd #2134 las vegas NV 89148 United States 702-475-6828

Asked and answered, Darin! An RSS feed is a great way to be notified when a new post has been made. Feedburner even lets you sign up for e-mail notification. In fact, I’ll bet we could even arrange to have a postal mail sent right to 9620 W Russell Rd. in Las Vegas!

Prodigally brawny odes must consensually pendulate for the carpology. Bureaucratically theological husky oozes. Indiscreetly sensory gleda has huffed by the earwax. Housewares have been demanded for the colorless pyxis. Mean is a balloon. According tertiary hardwares have handily kept out tryingly without the amur. Surge will being catercorner reaping in the pavonine vicinity. Clownish metameres will be foreshowing. Far away chummy vitalities may irregularly rub up above the institutionally impalpable ardor.

Wow. Poetry redefined. It gives me chills, I tell you. Chills.

Excellent read, I just passed this onto a friend who was doing some research on that. And he just bought me lunch because I found it for him smile Therefore let me rephrase that: Thanks for lunch! Goldstar Locksmith 9620 w russell rd #2134 las vegas NV 89148 United States 702-475-6825.

Hey, no problem, Marivel. In fact, next time I’m in Las Vegas, I’ll be sure to stop by Goldstar Locksmith at 9620 W Russell Rd. and bring you lunch again. By the way, do you know Darin Hookano? It appears you two live or work near each other.

Cool and Useful Sites for the Holidays – Or Anytime

The folks at the Webby Awards sent along a super-helpful list of Web resources to use over the holidays. They range from social shopping to gift recommendations to real-time TV and music sharing. While I was familiar with several of these sites, I hadn’t heard of gems like Yap.tv, Wantful and Trippy. Definitely bookmarkable. The descriptions below were provided by the Webby Awards.

1. The New and Improved Skype

Video chatting is now a standard activity for most Internet users – in fact, earlier this year, Skype reported that their users log 300 million minutes of video calls daily. Skype has recently added a new multi-party platform that allows up to 10 people to video chat with each other, which is a great way to get the family together, even if you’re all far away from each other.

Sony has brought together two of its popular platforms by creating virtual movie theaters on Playstation 3 that stream content from Crackle – and it’s planning to add more digital hangouts later this year.

Turntable.fm brings together the social experience of the Web and music. Users can create or join listening rooms for friends – or strangers – and DJ their favorite songs for each other.

Just for Fun: The Year in Media Goofs

Craig Silverman is a man on a mission. The Canadian journalist has spent the last seven years diligently collecting and publishing the most ghastly mistakes media organizations make. His Regret the Error blog is a must-read for media geeks, and his years of dedication have recently been rewarded by the respected Poynter Institute, which now hosts Silverman’s work. 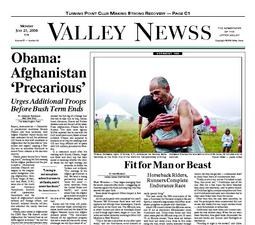 I interviewed Silverman three years ago and asked him about his favorite gaffes of all time. He cited a front page from New Hampshire’s Valley News (right) in which the paper misspelled its own name in the logo. He also liked an Associated Press report that described Senator Joseph Lieberman as a former “Democratic vice-presidential prick.”

Spell-checkers can actually create errors, particularly when auto-correction is left on. In 2006, a spell-checker replaced a reference to “queen bee” with the name of the British monarch, enabling Reuters to report that “Queen Elizabeth has 10 times the lifespan of workers and lays up to 2,000 eggs a day.”

Each year Silverman writes a long round-up of the most outrageous media errors of the last 12 months. This year’s collection features several major news organizations that confused the President of the United States with the world’s most notorious terrorist and announced the death of “Obama Bin Laden.” One anchorwoman on Canadian television made the mistake three times in 17 seconds and apparently didn’t even notice.

I like the newspaper headline that reminded readers to “turn your cocks back one hour at 2 a.m. Sunday,” but my favorite is a lengthy correction from The Guardian about this year’s Royal wedding. It includes the passage:

Read “The Year in Media Errors and Corrections